The question about the flash memory (NAND) grades or tiers have come up on occasion. When I first heard about grading being used for the flash memory, I was not sure what to make of it. I was set to learn more about this intriguing nomenclature and get it all figured out.

Without too much thinking, Google was the first obvious choice to easily load up on the subject. However, after the clock turned a half of the dial, it was clear to me that it’s not going to be easy. For some reason, I could not get any authoritative explanations; just opinions and hearsay. This will not do; I must press forward!

Truthfully, after realizing that grading may be just hot air, my enthusiasm has waned. A couple of months later, I decided to ask a couple of USB flash drive suppliers about these grades or tiers or something that can relate to the quality aspect of the flash memory. To my surprise, I got similarly vague answers as my extensive Internet search – Bummer!

The following is a summary of the collected information:

Grade A –  Original (i.e. just as it came form the original manufacturer’s production line) flash with all the manufacturing identification marks, and passed manufacturing inspections

Grade C – Modified or upgraded flash. The controller on the PCB is modified to report a larger capacity than what really exists on the drive. The USB flash drive reports 64GB; however you only got 32GB of the flash storage.

Grade D – Recycled and/or heavily modified flash. If it’s recycled, who knows how much life this memory has left in it. It reports 64GB; but there is a 1MB worth of the actual storage.

So what’s the verdict?

It’s rather difficult to tell for certain. It seems that this terminology has been adopted by the flash memory traders and USB flash drive manufacturers. However, an educated guess can be made when the processor technology is compared to the flash memory technology. (What?)

Even though the technology is different, there are some parallels that can be drawn. After the dies are deposited on the wafer, they are tested for quality. Those dies that have a sufficient number of transistors to pass under the intended specifications, are marked and released from manufacturing. Basically, if you are making a 64GB NAND memory die, and the tested amount of transistors return at 549,755,813,888 bits or more, you got a solid die. The testing will also involve performance characteristics. 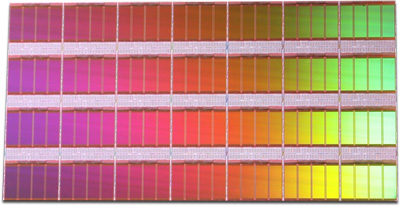 Some dies do not pass the test  to a point where there is less than the intended amount of working transistors. As in the processor chip manufacturing, these are sorted into a different pile. In the processor world, the failed dies become your economical choice processors (e.g. Intel’s Celeron or AMD’s Duron or some other downgraded processor). A similar process must exist for the NAND dies as well.

I want the best grade!

The best grade, one way or another, is Grade A, Tier 1 or Original Flash Memory. If your source is reliable, this is your choice, if you’re looking for the highest performing flash memory with the potential of being the most reliable.

The Grade B flash is close second. It still passed the manufacturing testing, just not to the intended specifications at the time of production. The capacity of the flash memory is full, and its capacity is fully tested.

The Grade C flash is something that you don’t want, unless you’re looking for the biggest bang for the buck. Hmmm… I cannot really think of a promotional or any drive where this can be used. Why would you want to mark the drive higher than it can actually hold? That’s just mean!

The discovery of the grading and tier terminology was a tedious and sometimes frustrating adventure. I’m sure that more specificity and corrections can be made to the discussion; overall, some certain conclusions can be made.

If you’re ready to spend a little more and need extra performance and possibly reliability from  your flash memory, choose Grade A (Tier 1). If a reasonable price, good performance and reliability is required, Grade B (Tier 2) is your choice. Grade C (Tier 3) or Grade D should not be your choice in any situation.

In regards to the flash memory manufacturers, Tier 1 Samsung and Hynix tend to stay on top of the NAND manufacturing world. Being the leaders of the industry and with the reputation for being reliable, they are an easy choice.