It has been a while since our last post. Back in September, we analyzed the market of the NAND flash memory and the future trend of prices affecting the cost of the USB flash drive. The logical conclusion reached at the time was that the higher prices were here to stay. Since Micron came to consolidate the position as the 3rd worldwide maker of memory chips, including NAND, it was not difficult to predict that prices have a potential to be high or rise.

The actual rough prices for the flash memory used in such devices as USB flash drive came slightly different than originally predicted. The overall trend, while higher in the year of 2013, showed a decrease in 2014. 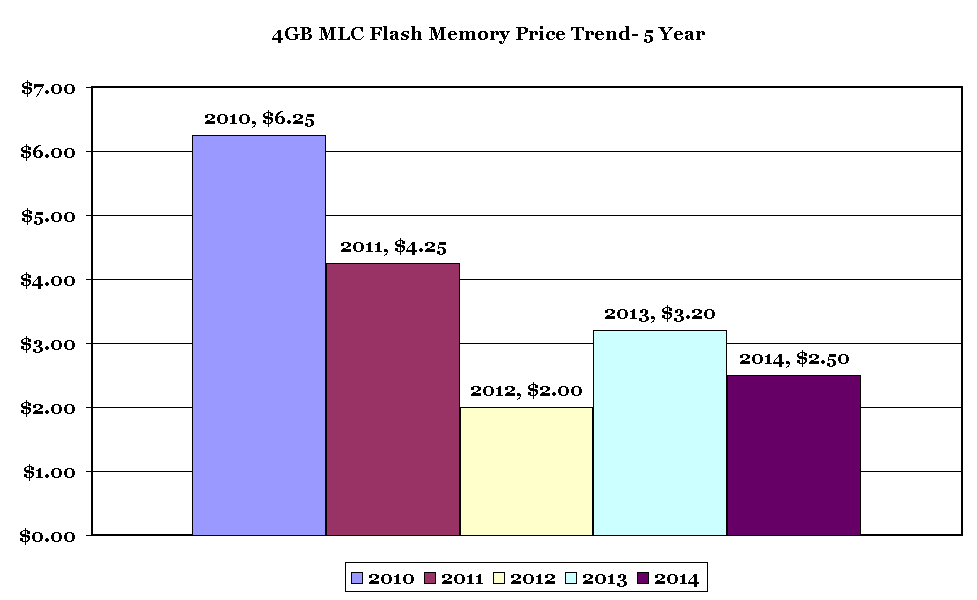 2013 has not been kind to price increase for flash drives. The incredibly low price in 2012 made customers cringe at the prices available in 2013. Since the NAND flash memory makes by far the largest percentage of the cost of the flash drive, the price increase of 60% was most undesirable.

While it may be surprising, the cost of the USB flash drive housing, memory controller and logo printing combined is a much smaller fraction of the overall cost of the drive when compared to the cost of the NAND flash memory.

Even though it was logical to predict the rise in prices in flash memory in general, there have been simple market trends that make NAND flash memory more affordable.

There may be some ongoing continued weakness; however the prices should stabilize as the manufacturers will fight the downward pressure to protect margins. The economic slowdown is nothing new and the manufacturers may move fast to trim production to restore prices.

The industry has consolidated to 3 major players – Samsung, Hynix, and Micron.  It’s simply in the business interest to make sure the prices don’t fall too far. Enjoy these low prices while they last.