I never knew that USB flash drives were gone

The personal computing devices have become increasingly fragmented (no pun intended). The good old PC has become a professional device – not intended for the masses. The need for great computing power is just not required for everyday tasks of writing documents, updating posts, watching a video, or even video conferencing (chat). The graphical chips (GPUs graphical processing unit) and central processing chips (CPU) have gotten fast enough for these common tasks. More performance is desired only by pros who need to operate tools to achieve specialized tasks in the information technology, R&D, or development fields.

Even with a portable version of a PC being a notebook/laptop/ultrabook, the race to create faster and more powerful units with large hi def screens, created products with fantastic computing performance; just the same as the performance of incredible battery drain.

A better product with good performance, mobility, and long battery life was desperately needed. Though, many people were skeptical, Apple was able to answer to the need with the iPad. Unfortunate to the USB devices industry as well as many who use USB devices, the iPad’s exclusion of the USB port meant bad news. With incredible adaptation of the iPad coupled with the Cloud ideology, the future of the USB devices was questionable at best.

Microsoft and Google To The Rescue!

Apple’s iPad was great news to the mobile and causal user; not so much for the USB industry or users of USB devices. The reasons of excluding one of the most widely used ports on a personal computing device could be various. It may make sense to limit the device to encourage users to integrate into the vast Apple’s app and cloud infrastructure. It also can make sense that the USB port would add cost and possibly adversely affect the look of the device. No matter what the reason was, without competition, iPad could be anything Apple wanted it to be.

Google had their answer back in 2011 in a package of a laptop – the Chromebook. The initiative was more of a feasibility study of the Google Chrome OS rather than an answer to the Apple’s iPad. However, the Surface tablet by Microsoft, just a few weeks before this post, is a great contender. Microsoft threw complete support for the USB 3.0 interface in the Windows 8 operating system.

With the new Chromebook models coming from Google backed by Samsung and Acer, and Surface tablet from Microsoft, the competition is starting to heat up. With the inclusion of the USB ports in the Chromebook as well as the Surface tablet, the USB devices have been offered another chance.

It is fortunate that folks at Microsoft and Google see the benefit of the versatile USB technology as a way to expand and enrich their devices. It’s our job as users to see if this technology still makes sense in the highly mobile world. What makes me glad is that the technological titans that are Google and Microsoft realize that the needs of the end-users drive the technology forward rather than Apple’s ideology of telling the end-users what it should be.

Some may say that USB devices, especially storage devices, are a way of the past. With the mentality of Cloud computing, it may seem as true. However, people still like having the data nearby and readily available regardless of the connectivity to the Cloud. The privacy of the Cloud services is a major issue as well. For those who see value in storing the data locally, with privacy, and having immediate availability through an easy USB port, rejoice – USB is back!

Monarch butterflies are indeed beautiful. Apparently, they are very popular as well. We simply would like to share the simple beauty of these USB drives with you. Enjoy. 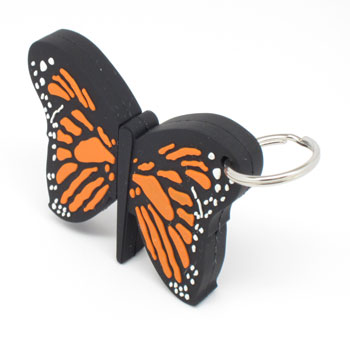 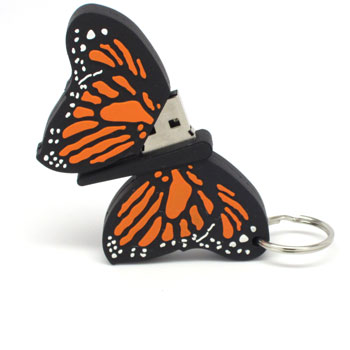 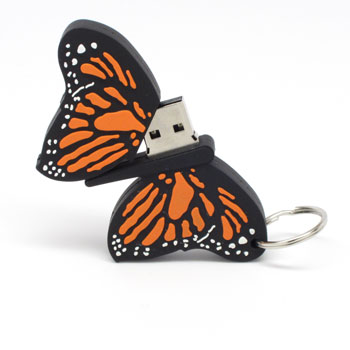 In case you are wondering, the top wing is fully detachable so that you can plug the drive in your computer. Like the drive? Let us make a custom drive for you! Any shape you like; all you need is an idea, photo, or a drawing.