Just recently we introduced a new model to our lineup – Mobile 360 OTG USB flash drive with a cap-less standard USB plug and capped micro USB plug on the other end. It’s great for silk-screen printing and occasional subtle laser engraving for your branding needs.

We’re launching a new model – Mobile OTG CS. It has caps on both USB plugs and a color metal jacket for effective laser engraved branding. The photo of the Mobile OTG CS drive without the protective caps is below. 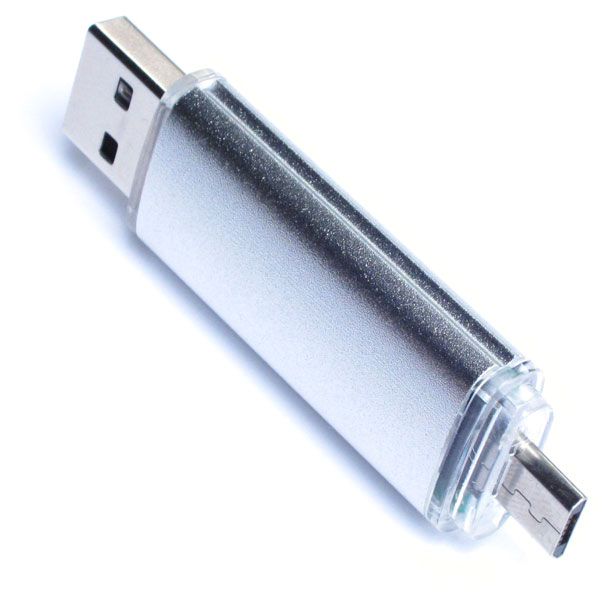 Carabiners are very versatile pieces of equipment not only for rock climbers, but for the ones who simply want to keep their keys secured.  Why not combine the indispensable flash drive with the security of the carabiner? Great idea! 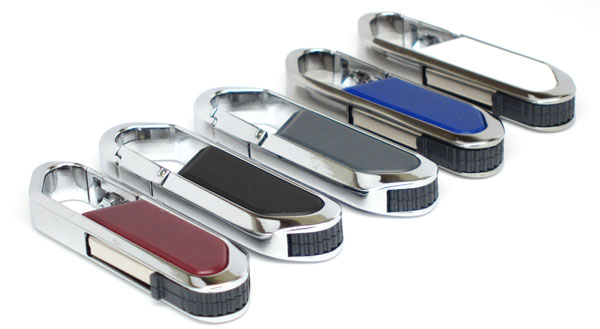 It works the same way as any other. The spring loaded gate lets you attach the flash drive to anything you like. The spring is strong enough to keep the gate securely closed. The thick sturdy construction and wide opening makes it strong and very useful.

Just flick the ribbed plastic piece with a small bump on the bottom of the drive to open the USB connector. It can be opened half way or full 180 for connection to any USB port.

There are many available colors; the ones pictured above are just a few we had available for a photo op.  Also, custom or match colors are also available.

These Carabiner USB flash drives are cool; combination of function and style is a great find. Check with us to get yours today!

I must admit that it was difficult to expect so much volatility from the NAND flash memory market in 2013. Just like the manufacturers and our customers, we’ve expected a nice downtrend in the prices due to higher availability and price competition in the flash memory space.

In a hunt for better grades of flash memory back in 2012, we identified several tiers of the flash memory manufacturers. The post is still available here for your reading pleasure.

A large manufacturer of DRAM – Micron has gone on a shopping spree by acquiring our third tier identified manufacturers Elpida and Rexchip for $2 billion. Effectively, Micron has eliminated third tier manufacturers and established itself as a first tier player along with Samsung and Hynix.

What happened to the second tier manufacturers such as Nanya and Inotera? Inotera is a join venture between Nanya and Micron. Finally, Nanya has entered into an agreement with Micron to purchase all on the Inotera output.

Micron has been aggressive in purchasing of DRAM and flash memory assets to position itself as one of the large players in the memory space. Simply put, the consolidation has yielded three main players in the industry – Samsung, Hynix, and Micron.

The photos of the black smoke billowing from the SK Hynix factory in Wuxi, China have sent immediate shock waves throughout the industry, increasing the prices on the flash memory and limiting the availability. After it was realized that the extent of the damage was not sufficiently significant to warrant a substantial price increase of the flash memory, the prices have marginally decreased from the initial spike.

Intel, Samsung, Micron, and Hynix are all investing big into 3D NAND flash memory technology. The equipment purchase and the overall investment will not be cheap. The reported performance for write speeds, density (capacity), and power savings are impressive; however the cost for this technology will be surely transferred to the buyer.

The newer technology gives the manufacturers pricing power while keeping the prices on the existing (planar) NAND flash memory high. When we finally start seeing the 3D technology, the pricing will remain high, feeding the higher margins of the manufacturers and not translating to lower prices to the consumers.

September and the whole 4th quarter of 2013 will see plethora of flash memory devices unveiling. Starting from Apple releasing the new iPhones – selling 9 million units as of two days ago, Microsoft releasing the new model of Surface tablets, the new iPads being released in November, Samsung with Galaxy phones and tablets, and ending with Google’s entire Android phone/tablet ecosystem spurring the demand as well as the whole PC industry moving to hybrid or all SSD drives.

The shift of the entire computing industry has been massive. The enterprise uses flash memory to speed up database server transactions and data throughput, the professional customers switching almost entirely to SSD to improve the PC performance, and regular consumers using an increasing amount of mobile technology with nothing but NAND flash for storage.

It’s safe to say that the environment is just right for a steadily increasing demand for years to come.

Higher Prices are Here to Stay

Given an environment where there is ongoing industry consolidation, increasingly high demand, and move to utilize newer technologies, it’s difficult to make a case for lower prices.

As the incident with the Hynix factory demonstrated, the flash memory marketplace is extremely volatile. The enormous demand cannot accept any hiccups in the supply; any reduction is met with immediate price hikes or even total lack of availability.

The consolidation in the industry paired with the move to the newer technologies puts even more pressure on supply, and allows pricing leverage to manufacturers. As some estimate that it may take up to 3-4 years for the 3D NAND technology to be widely available; that’s should be the estimate for how long we would endure the higher prices.